From a Poker Copilot customer who tried Poker Tracker:

“I downloaded the Poker Tracker 3 60 day trial and gave it a shot. And I didn’t just give it a little shot. I played 50,0000+ hands total in the last year (amateur for sure) and I played the last 5,000 using PT3 exclusively. And I prefer Copilot. No doubt I’m partial to your product being the first Mac tracker to market, but I wanted to be intellectually honest about it. Best product wins.

“As a Mac user, Copilot wins for me. There are valuable things I could get out of PT3 that I can’t get out of Copilot. BUT you’re constantly advancing. And your product is (to me) so perfect for the Mac market. Figure out what 95% of the customers want and go with that rather than trying to please the other 5% too and making an overly complicated product for everybody.”

This was an unsolicited email. I’ve got several emails like this recently. I appreciate them!

I don’t want to get caught up in a “My product vs their product” slagging match. Live and let live, as they say. So you probably won’t hear much more from me on this issue.

So _THIS_ is why I can’t advertise on Google or Yahoo!

“In 2007, Microsoft, Google, and Yahoo! settled [US government] claims that they profited from gambling ads by agreeing to turn over a total of $31.5 million in cash and public-service warnings.”

That comes from Joseph Menn’s excellent Fatal System Error: The Hunt for the New Crime Lords Who are Bringing Down the Internet, a book I’m reading about cyber-crime. It’s an eye opener.

Menn discusses PartyPoker and PartyGaming, which he claims was started by Ruth Parasol, who he alleges to be a former porn-site and phone-scam empress and is now an extremely wealthy woman.

Menn also claims that online gambling in the USA is mostly run by organised crime groups, operating out of Costa Rica and Dominican Republic. Many of the characters sound like they are straight out of The Sopranos, and have blackmailed and cleaned out some celebrities. These shady operators themselves were extorted by Russian-based hackers, who threatened (and carried out) DDOS attacks unless they were paid hundreds of thousands of dollars.

Not being American, this is all news to me. Now I know where Patrick’s Scum and Villainy concept comes from.

He also discusses the Absolute Poker and UltimateBet scandals. That’s the only thing I’ve read so far in the book that wasn’t something I already knew.

Full Tilt, PokerStars, and Ongame Network are, so far, unscathed by Menn.

I highly recommend the book.

You can download a special update of Poker Copilot with the Rush Poker HUD window here:
http://pokercopilot.com/downloads/pokercopilot2.30.dmg

I haven’t yet worked out a way to automatically determine if a poker room window is Rush Poker or normal poker. So you’ll need to

If this works successfully and proves helpful, I’ll consider adding the ability to customise the stats shown.

This morning I did my daily check of macpokersoftware.com. I typed “Mac Poker Software” into Google, turned off the Google customisations that makes search results tailored to my searching history, and – bingo! There was macpokersoftware.com in spot 8 on the first page of results.

A big thanks to Patrick McKenzie who gave me the strategy to do this. We had our initial email conversation on January 13th. Now, two weeks and two days later, results are already apparent.

I’ve been using Google Analytics to monitor Poker Copilot web traffic from day one. Using the accumulated data I used the Google Analytics’ data visualisation tool to show where my traffic comes from, and how it has changed over time:

There’s some amazing free tools available these days to help run a small business on the web.

Here’s a screenshot of where I’m at: It works. For those who remember Poker Copilot 1, this is eerily reminiscent of the “Classic HUD”.

I should have something available for you to try very soon.

The fix, 2.29, seems to be running extremely well. So I’m happy to designate it the official release. Actually I don’t have much choice. PokerStars is the most popular Mac online poker room, and it only works with 2.29.

Here’s a list of the major improvements since version 2.23:

This is mostly a repeat of information from earlier blog posts.
2010-01-27

I’m designing an alternative HUD for use with Full Tilt Poker’s new Rush Poker. This is where I’m at: 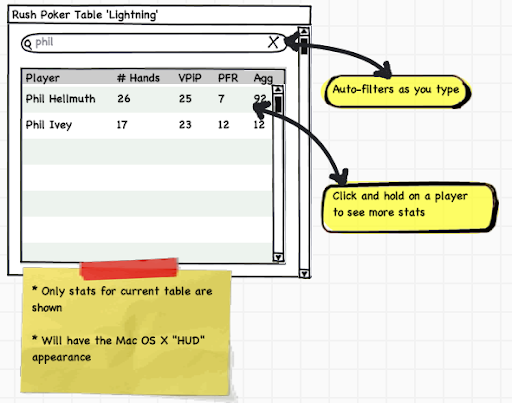 It’s basically a mini-version of the Poker Copilot player’s summary, shown just for one Rush Poker table. The aim is to let you find the info for a player as quickly as possible.

Poker Copilot can’t auto-detect who you are currently playing a hand with in Rush Poker because in each hand the players change. Screen-scraping is a possibility but that introduces so many potential problems it makes my head hurt already.

Before I start implementing this, I’d love some feedback.

Note: This is a rushed release that I have to do to prevent an overwhelming deluge of support emails. I’ve run through my battery of test cases, I’ve imported 1 million hands, and tested on Leopard and Snow Leopard. However there may be some problems. If so, I’ll deal with them immediately.

PokerStars hand history files use UTF-8 encoding. Until today they had no UTF-8 Byte order mark (BOM). Now they do.

Java has a known bug where it can’t read UTF-8 text files if they have a BOM. Sun knows about this. They decided not to fix it so as not to break existing Java-based software that relies on this bug.

Fortunately someone made UnicodeReader, a work-around class that I can use as a drop-in replacement for the offending Java class.

[Part of my continuing series on an SEO experiment.]

I mentioned earlier than on Patrick McKenzie‘s advice I paid Yahoo! to add macpokersoftware.com to the Yahoo! directory.

I received a “we won’t be accepting your money” email from Yahoo! yesterday:

We’re sorry to report that your site did not qualify for listing using the
Yahoo! Directory Submit service. Yahoo! does not accept listings for
online gambling sites. Online gambling sites are those that
have gambling as their central theme, including those that
accept wagers or require payment in exchange for the chance
to win prizes, as well as sites that offer both information and
links related primarily to the promotion of online gambling.

For this reason, your order has been forwarded to our billing
team for a full refund of the Yahoo! Directory Submit fee.

Frankly, I’m not bothered. I get my money back and I can stick to the “provide useful non-scummy content” strategy.

On a tangent, a good percentage of all the traffic to macpokersoftware.com is coming from Stockholm. Currently 11% and on an upward trend. I have no idea why.