Making the Poker Copilot demo video work on an iPad?

Poker Copilot has a nice demo video. (Watch it if you haven’t seen it.) I recently got myself an iPad. The video doesn’t work on an iPad. That’s because the video uses Flash, and Flash is absent from iPads.

So I thought I’d change the video to use HTML5’s built-in video player. Oh but that won’t work on Internet Explorer 8. It’s an issue but not a huge one. But huger is that using video on HTML5 is a mess, if you want to support multiple devices and browsers. From Dive into HTML5:

There is no single combination of containers and codecs that works in all HTML5 browsers.

This is not likely to change in the near future.

To make your video watchable across all of these devices and platforms, you’re going to need to encode your video more than once.

Video, in this YouTube era, should by now be easy to supply. Sometimes we in the software industry make a real hash out of things.

The Poker Copilot user guide is now available in French. For now it is only available as a PDF, although I intend to make it a series of HTML pages too. Get it here.

Coming in the next update: summary rows

Anyone who uses spreadsheets expects it to be easy to add a summary row to a table. In Java (the computer language I use for Poker Copilot), it is not easy. The language designers didn’t foresee the need for summary rows, so it involves some pretty nasty programming.

Which is why, until now, Poker Copilot hasn’t had summary rows. The next version will finally add this, in the Stake Level summary, the Hand Type summary, the Position summary, and the Day summary.

This update needs to update your database.

Coming in the next update: filter by tournament size

The next update of Poker Copilot will let you view stats for tournaments only with a specific number of players. 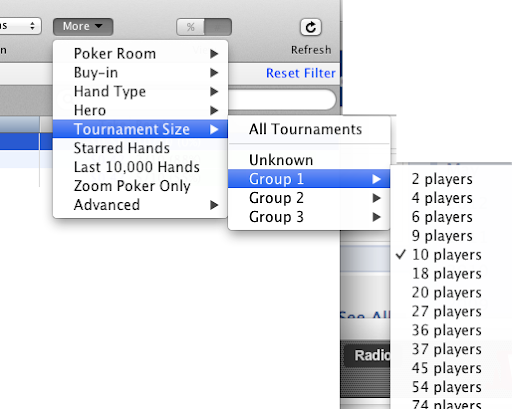 This has been one of those long-time, low-priority requests that I’ve finally found time for.

Poker Copilot does not support the current Mac version of Lock Poker. There are two reasons:

1) Lock Poker for OS X is currently actually a wrapped Windows version. This means that the poker windows can’t be detected through existing Mac programming techniques. Which means I can’t make the Poker Copilot HUD with Lock Poker

2) The hand history files seem to partly anonymise player names. This makes it hard to build up a database of player statistics. You might encounter the same player on five different tables, and each time the player’s name will be different. Until this changes, hand tracking is not useful.

As soon as Lock releases a native Mac version, I’ll reassess. On the 2+2 poker forums, a customer support guy for Lock says there is something in the works. However, I’d expect it to be some months before they will have it complete.

Thanks to all who helped solve the problems with this. Reps from Merge Network and BlackChip Poker were helpful too, which I appreciated as they are doubtlessly stressed and overworking at the moment with the pressure of dealing with the teething problems of the major changes to Merge Software.

Note that as of today’s update to the Merge Network, hand histories are being saved properly in the correct location. Poker Copilot will assume the default location is being used, which is:

Now that a week or so of dealing with changes to Lock, Merge, and PartyPoker, and the introduction of PokerStars.ES (Spain) is over, I’m looking forward to a hopefully calm weekend.

Solution to the Merge Network Problems

(Update: the original links in this post were for a Poker Copilot update that only worked fully if your Mac OS X account name is “steve”. Now it should work no matter what your name.)

So that’s what I’m asking Merge players to download this unreleased update and give it a try. Please let me know in the comments which Merge Network room you are on, and how it worked.

The update will try pretty hard to locate your Merge hand history files IF you have the “Auto-detect hand history folders” checkbox checked in Poker Copilot’s Preferences. 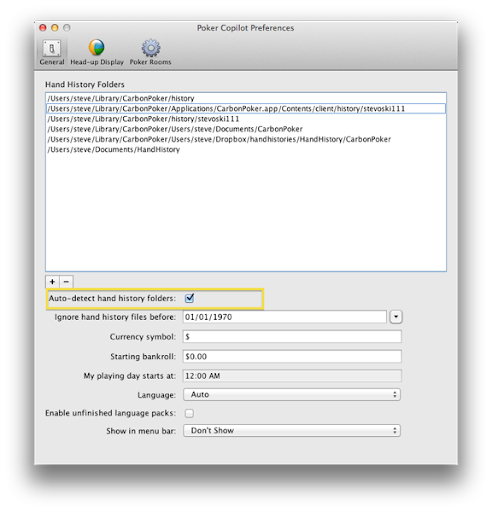 Merge and Poker Copilot: an Update

It turns out that the new Merge Network is indeed saving hand history files. It just isn’t saving them where it claims to be saving them: 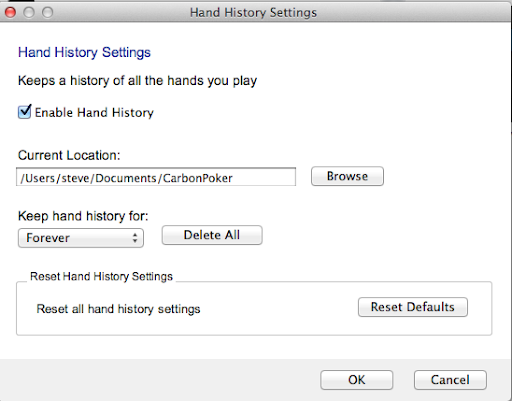 In the screenshot from Carbon Poker, I’ve set my hand history files to be saved in

But they actually get saved to

Merge poker rooms such as Carbon Poker released an update overnight. Unfortunately there seem to be initial problems with this update. For me, at least, Carbon Poker is no longer saving hand history files, even though I’ve checked that it is enabled.

Has anyone successfully got the new Carbon client to save hand history files? 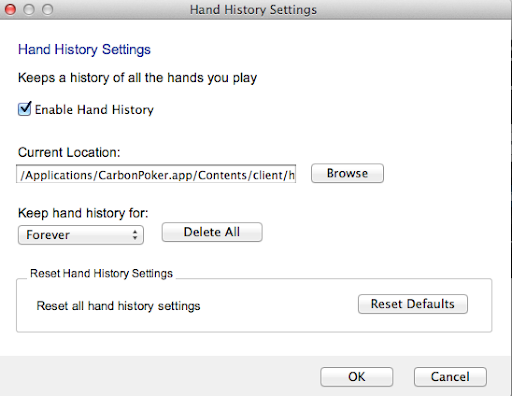 My first suspicion is that the problem was Carbon’s default location for saving hand history files – into the App’s own bundle. This is a no-no on Mac OS X – the app bundle should be considered read-only. I tried changing to another location but still had no joy.

(Merge development team: if you are reading this, I’m offering to help test your Mac software to make sure it will work with tracking software such as Poker Copilot.)