Until recently Poker Copilot had to guess the table size of Merge Network poker rooms. I noticed that Merge has added this information to hand history files, so now Poker Copilot can correctly determine the size of the table. This is a particular improvement for tournaments.

To fully benefit from this improvement, please make sure you’ve set a preferred seat in your Merge Network poker room for each table size that you are playing on, and that you’ve set the corresponding preferred seat in Poker Copilot (Preferences -> Poker Rooms -> Lock Poker). Also, you’ll need to drag each HUD panel to the place you want it initially. After that, they should stay where you put them.

There’s a new category on the Poker Copilot Discussion Forum, in which you can discuss in the French language.

I don’t speak much French, so I can’t participate unfortunately.

Coming in the next update: multiple HUD layouts

The next Poker Copilot update introduces one HUD layout for ring games and one for tournaments. Here’s the preferences screen to configure them: 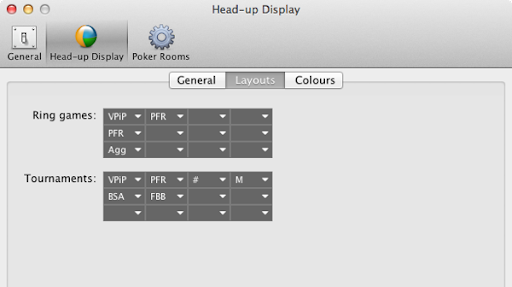 And here they are in action, two tables at the same time, with two different layouts:

Poker Copilot Fact of the Day

Over the last six months, France has accounted for 20% of Poker Copilot sales. In the last month, this has risen to 25%. Somehow this information eluded me until today.

I’m not sure what this means from a business decision-making perspective. It could mean I should focus on enhancing my French support, by translating the user guide into French and finding a French speaker to help with user support in French. Or it could mean that I need to focus more on countries other than France to compensate for the lesser sales.

I’ve updated a couple of key third-party libraries in Poker Copilot. This broke some stuff, which I believe I’ve fixed. However my belief is weak so I’m making the update publicly available for anyone to try before making it the official release. Download it here.

The most significant change is that some problems with Merge Network stats are fixed. Other changes:

Feedback is, as always, welcome.

Coming in the next update: All-in Equity in $ or Big Blinds

The screenshot says it all:

Loyal Poker Copilot customer Florian asks for the France-only poker room BarrierePoker.fr to be added. As I’m not in France, I can’t get onto this poker room to check it out. So some questions:

Coming in the next update: Filter tournaments by typing text

You can now filter the Tournament Summary in Poker Copilot by typing text into a search box:

This feature has existed for a long time already in the Player Summary.

This is another one of those features which I added to make my “customer support” role easier, but which I thought could be useful to some of you.

Loyal Poker Copilot customer Jon asked about creating an AHK (auto-hotkey) program for Merge Network poker rooms. I think the best approach is to take the existing work done in BlazingStars (an open source PokerStars only Mac AHK-like program) and adapt it, because the technical problems have already been solved there. Can you program in Objective-C? Want to help?

The first step of course is to invent a name. We need a name that’s witty at first, but that seems less funny each time you hear it.

Coming in the next update: choose a language for Poker Copilot

Until now, you had two choices for language in Poker Copilot: the language automatically chosen according to your System Preferences, or English:

Now you can pick any language that Poker Copilot knows: 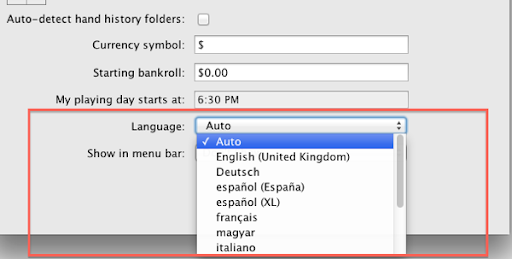 I suspect the main user of this feature will be me, when I’m making screenshots to help users who are using Poker Copilot in a language other than English. But I hope this is of benefit to the occasional Poker Copilot poly-linguist.