I’ve spent considerable time this week at the kitchen table playing multi-way hands of poker with myself with piles of 1-cent coins for stacks. This helped me create various split pot scenarios and contemplate how best to handle calculating all-in equity value. Sometimes the best way to solve a programming problem is to get away from the computer and instead deal with something quite concrete.

Do you grok equity value and how to calculate it in complicated situations? If so, can you take a look at this discussion topic?

A fellow Java developer is working out what version of Java to use for his new project:

I’ve been waiting YEARS for Java 7. It keeps getting pushed back. Nobody seems to be able to decide what features it should have and shouldn’t have. Occasionally there is a radical change in direction that pushes back the proposed delivery date even more.

Can I Steal Your Email Address? 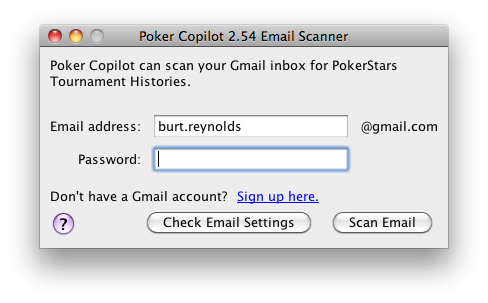 It would be a trivial task to send this email address to a website that is waiting to gather email addresses.

When you get started with a new Mac, part of the setup process involves you specifying your email address. Your Mac then stores this in your Address Book. ﻿Leopard introduced a new feature in Cocoa’s ﻿ABAddressBook API that allows applications to access this info.

If this worries you, then you should install Little Snitch or similar software. This informs you of all communication a specific program has with the Internet. Or you could go into your Mac’s Address Book and remove your own email records.

I don’t want you to think I am paranoid. I’m not, I think. I simply find this situation interesting. The first time that software (Transmit 4) I downloaded told me my own email address I was somewhat surprised. And being a curious type I just had to know how it was done.

Coming in the next Poker Copilot update

The next update of Poker Copilot shows the probability of a hand winning in the replayer. It updates as the hand continues. You can see how your odds improve when a player folds or you hit a favourable flop.

Here’s a demo. Note the “Probability of winning” displayed in the lower right-hand corner:

Although the check box for this feature is labelled “Odds”, it is actually not odds but a probability in percentage format. I’m sure my mathematically inclined users will tolerate the misuse of the word “odds”. Then again, maybe I’ll show the odds as well as the probability: 50% (1:1) or 93% (13.3:1)

The probability is calculated using a “Monte Carlo” simulation. That is, rather than exhaustively count all the possible outcomes and calculate which ones would lead to victory, a random sample of possibilities are used. This leads to “close enough” results in a tiny fraction of the time otherwise needed to test all the millions, billions, or hundreds of trillions of possibilities. I use a fixed random number seed to ensure that playing the same hand twice gives the same probabilities. Otherwise the probabilities might fluctuate within a tight range.

Some people claim that using poker tracking software like Poker Copilot is cheating. Clearly I don’t think that at all. Nor do the major online poker rooms, who have explicitly granted permission for players to use Poker Copilot. This is because Poker Copilot only uses information gathered from your own playing history.

Here’s what cheating really looks like in live poker.

Poker Copilot 2.54 is now ready to download. There was a fatal flaw for Winamax players in yesterday’s update that caused Poker Copilot to crash.

It’s been a turbulent week here at Poker Copilot headquarters, with five updates, all dealing with changes to the formats of hand history files. “Fire-fighting mode” is how they call it.

Now the week is almost over I’m looking forward to spending this weekend in Paris, where I’ll watch the final stage of the Tour de France. Paris is slightly more than 3 hours away by high-speed train from my home in Cologne, making it a perfect weekend trip.

AND Things Are Back Where They Were 2 Days Ago!

Full Tilt Poker released another update today. This update undid the changes to the hand history file format from yesterday. So the slew of quick Poker Copilot updates were perhaps not necessary after all, except that you’d have a day or two of hands missing from your playing history.

I received an email from a Full Tilt Poker developer today. He apologised for the disruption caused by yesterday’s update. He said that they would undo the change. It was nice to get the email. I assume the teams behind Poker Tracker and Hold’em Manager also got such an email. For me, getting the email show that Full Tilt Poker are aware of Poker Copilot and approve of it. They’ve also offered me a direct email contact into their development team. ‘Tis grand.

It’s been a crazy couple of days for me. Yesterday, Full Tilt Poker AND Winamax both changed their hand history file formats. Full Tilt also changed their tournament summary format.

I thought I had fixed the Full Tilt problem quickly, but my first fix didn’t work for people using their Macs in a language other than English. So out came fix #2. But this didn’t work for tournament summaries.

Here’s fix #3, which hopefully now works for everyone, including Winamax players.

Poker Copilot 2.53 fixes these issue and is now ready for download.

Note: There may still be an issue with play money hands on Full Tilt Poker not working with Poker Copilot. A couple of people have reported this but I’ve been unable to reproduce it here in the lab.
2010-07-21

Full Tilt is keeping me on my toes.

A little over an hour ago, I started getting a steady stream of emails all saying the same thing: Poker Copilot is having problems with the latest Full Tilt Poker update. Full Tilt has changed the date format they use in their hand history files. Most notably, they’ve removed the seconds from the time. I’m not sure why they would do this but I’m sure they have a good reason.

Poker Copilot 2.52 fixes this issue and is now ready for download. Here’s how to update: