This is an “issues” update. There are no new features, but I fixed several issues. Which gives me a perfect opportunity to link to Flight of the Conchords, the pride of my home country and “formerly New Zealand’s fourth most popular guitar-based digi-bongo acapella-rap-funk-comedy folk duo”, who sing about the issues. Or as we say in New Zealand, the “uh-shues”.

Quote of the Day:

everything we do, we do in bursts–brief periods of intensive activity followed by long periods of nothingness. These bursts are so essential to human nature that trying to avoid them is not only foolish, but futile as well.

So true for me with my development of Poker Copilot – and plenty of other software creators I know. The idea that one should work with the nature of bursts, rather than fight against it appeals to me.

From the Blog Comments

My secret is this: I hardly ever watch television. I try. But almost nothing on television interests me. That’s partly because I’m living in Germany, where I never fully mastered the local tongue. They dub all the interesting American and British shows, which makes watching them pain instead of pleasure. Sometimes I go longer than a week without switching on the television. Then when I do switch it on, I mostly switch it off again after fifteen minutes.

And so I do something I find interesting with all that extra time.

The Benefits of an Established Blog

Ten days ago I announced the release of PokerZebra 0.5 on this blog. There are now hundreds of results in a Google search for PokerZebra.

The search results are sites that mostly repeat my announcement of the 0.5 release. Somehow many have increased the version number to PokerZebra 1.0. This is surprisingly, because I’m pretty sure – almost 100% certain – that I haven’t done any more work on PokerZebra since releasing 0.5.

It took many months of blogging, commenting in forums, and giving away free Poker Copilot licenses to get the same level of Google coverage for Poker Copilot’s initial releases.

Loyal Poker Copilot user Manuela was having problems getting Poker Copilot to recalculate equity values. It would work for about 11,000 hands, then act as if it was finished. Only it wasn’t.

The problem was that one hand caused a problem for Poker Copilot. The code to handle an error that occurred while recalculating equity values looked something like this:

Well, it was a lot more complicated than that, but once I worked out the cause, it could be reduced to naive error handling.

There are three ways one can handle such problems in code:

1) Try to recover as silently as possible, don’t bug the user, and keep running. This seems user-friendly, but actually hides the underlying problem, which causes worse, hard-to-diagnose problems later on.

2) Give the user an error message, but continue when they click OK. “There was an AQ-787-34.2 error while processing your data. Please report this to the Poker Copilot team. Click OK to continue.” This just puzzles most users. Even a human-understandable error message is puzzling and perhaps disconcerting. Most users won’t report the problem. Of those who do, most will report something like, “Poker Copilot has a problem. What shall I do?” Which is useless as a bug report.

3) Crash violently, in a way that can’t be ignored. Automatically generate a crash report which the user can send with one click. Because the buggy action stops the program from continuing, and the user probably wants to continue, they’ll most likely click the “Send Crash Report” button. This forces the error to reveal itself as soon as possible. The crash report contains all the information needed to pinpoint the location in the code where the crash occurred. It also contains other useful info, such as the version of Poker Copilot, the Mac OS X version, the Java version, and the user’s Mac OS X language settings.

Somewhat counter-intuitively, the best way to have low-error software is for the software to crash completely and immediately when it encounters an unexpected problem (an “unknown unknown”). Perhaps this wasn’t so when software came on a disk you bought in a bricks-and-mortar shop, and getting updates was hard. But with always-on, high-speed Internet where software can be updated frequently, it works well.

In the next update Poker Copilot stops suddenly and creates a crash report if recalculating equity values fails.

What is “Equity Value”?

Imagine in a hand of No Limit Texas Hold’em you have AhQh and your opponent has KsKc. Your opponent raises to $10 and is all-in. You call the bet, making the pot $20.*

* (Assume for this example that you and your opponent posted the blinds, all other players folded, and that there is no rake.)

The formula for equity value (also known as pot equity) is:

What is “Equity Value Difference”?

The formula for Equity Value Difference is:

How do I read the “All-in Equity” chart?

In the long run, the “All-in Equity” chart is a measure of how good your reads are when going all-in.

If, in the long run, you mostly go all-in when you have favourable equity, then your “Total Winnings” line will be above your “All-in Equity Value” line. You are tending to correctly guess what ranges of cards your opponents have, and are making all-in bets and calls wisely, based on those guesses.

If, in the long run, you mostly go all-in when you have unfavourable equity, then your “Total Winnings” line will be below your “All-in Equity Value” line. You need to be more selective in going all-in. 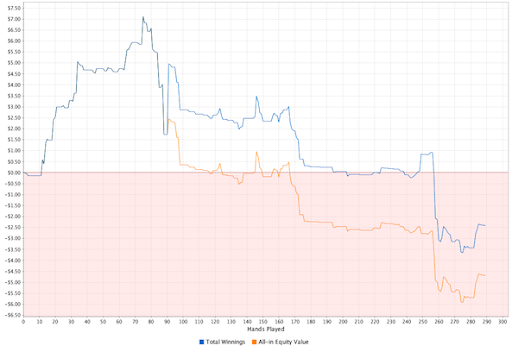 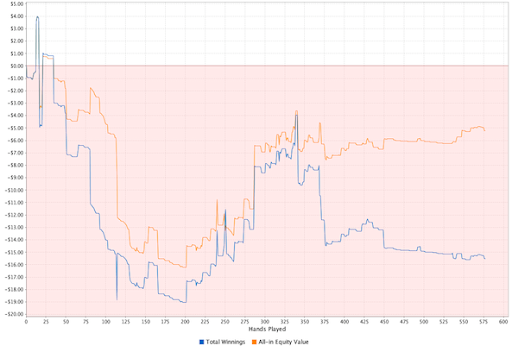 No HUD and No Data on Full Tilt?

The latest Full Tilt Poker update seems to be stubborn. It always wants to write the hand history files in the language you are using Full Tilt in, rather than in English.

I’m using Full Tilt in German at the moment. I’ve set the Hand History Options (“HandVerlauf…”) to use English. But Full Tilt really, really wants to write the hands in German. So this stops Poker Copilot from working.

Solution 1: Use Full Tilt in English

(This is life when you sell poker tracking software. You have not only your own bugs to deal with, but also the bugs of the poker room software.)

I’ve given the hand replayer a fresh coat of paint: 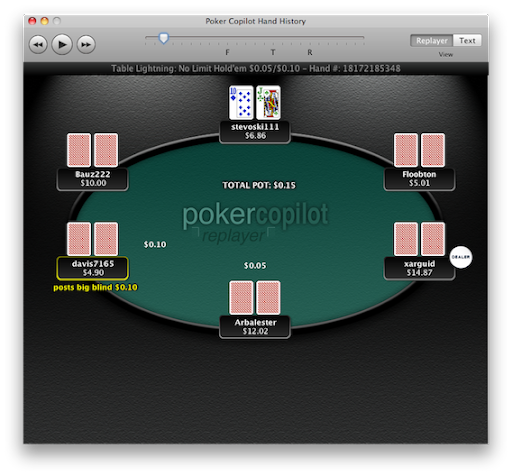 This is the first step in some replayer improvements.

Notice the big gap at the bottom? That’s where upcoming new Hand Replayer features will be added.

This new look will be available in the next Poker Copilot update.