I was asked by loyal blog reader Buddy,

I was just curious as to how much success you have seen with Poker Copilot.  Mostly just because I know you put a lot of work into it and I hope it is successful enough for you to continue do so – it would be great to see developers have as much dedication to their product as you do.  I really don’t have much of a clue the amount of Mac poker players serious enough to use a HUD.  I hope you’re getting back what you’re putting in.

It is a good question. Naturally I’m not going to give specific numbers. But here’s my response:

I earn a respectable income from Poker Copilot. And it is much more enjoyable work than from the days I had to get up early, shave, wear a suit and tie, and go to a soul-crushing corporate environment where things moved at a glacial pace.

The corporate world and I never really got on too well. My level of job satisfaction is many times higher than it was in the bad old days.

Setting up a New MacBook Pro: The Good, the Bad, the Hideously Ugly

I bought a new MacBook Pro recently, in preparation for a big trip. I transferred everything from my iMac – my workhorse machine – to the MacBook Pro using Time Machine. Mostly it went well. Very well. So well that I can open a Terminal window on the new computer, type “history”, and see all the recent commands I executed on the old computer. Most software works as if nothing has changed. My full development environment works just as before. Which is the good.

Now the bad. Some applications recognise that this is a new machine. They want me to jump through hoops to sort this out.

The worst offender is Adobe Fireworks, and earns the “Hideously Ugly” award. Adobe’s license system assumes I am pirating software and treats me as guilty. It recognises that this is a new machine and therefore wants me to buy a new license. Or disable a license elsewhere. Except the second installation Adobe granted me was lost when I had to replace a motherboard. Now I have to get on the phone and persuade Adobe to sort this out. I did that once before, and it was a painful process.

Fireworks is good software and I spent time learning to use it properly. But due to this ongoing pain their license system causes, I’ve decided to stop using it. Instead I’ll find an alternative that might not be quite as good but will not assume I’m engaging in software piracy whenever I update computers, have a hard disk crash, or suffer other computer problems.

This is the update with M-ratio and 4-bet and fold-to-4-bet and big blinds remaining and a better colour chooser and recently seen opponent cards and winamax preferred seat recognition and – well, I guess that’s it. Except, of course the translations of Poker Copilot into multiple languages.

I intend to release it tomorrow. Over at the Poker Copilot Translation Project page you can get a sneak preview. Failing any major problems, this is almost exactly the same update that will be released tomorrow.

Email of the Day

A person who just found Poker Copilot sent me a very nice email. An excerpt:

I happened to stumble across your site earlier today, and the SECOND I saw your screenshots, I KNEW I that I HAD TO try your program. I LOVE IT. The entire interface, for the HUD AND the software itself is SO CLEAN AND ORGANIZED! It’s so simple to read and make sense of!

Coming in the Next Poker Copilot Update

The next update will be huge. There are many small tweaks and additions. And languages. Here’s something I’m in the process of adding: 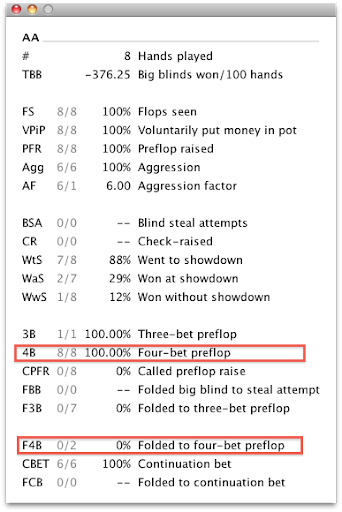 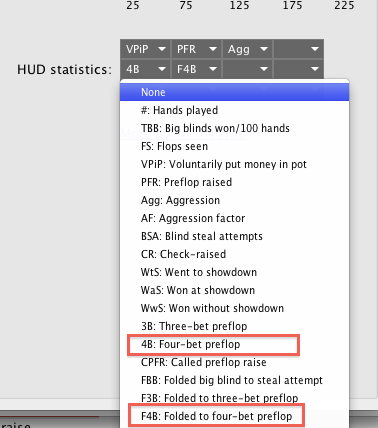 And…..cue the comments of people saying, “this is good, but we need even MORE statistics. More, more, more!” I hear you people, but remember, Poker Copilot is a one-person show with lots of user support and feature requests and bug fixes and work-arounds for poker room hand history problems and marketing and, and, and…

I think this is my favourite of all the Poker Copilot translations: 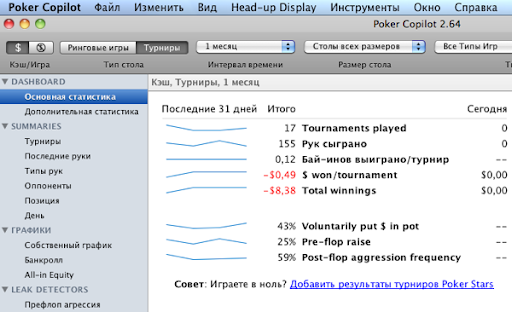 To a non-Russian speaker, it looks so exotic with the Cyrillic alphabet.

Handling Russian took a bit of rework. All Cyrillic letters have to be replaced in a strings file with a bunch of unreadable codes. Humans write this: 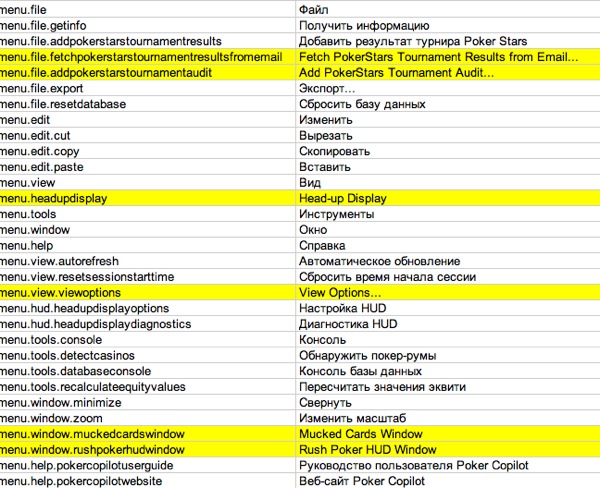 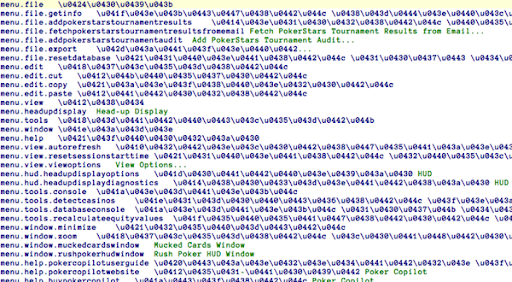 Fortunately I could automate the process with a block of Java code to download the translations from Google Docs and run each translation through “native2ascii”, a Java tool that converts from the readable format to the unreadable format:

Coming in the Next Poker Copilot Update 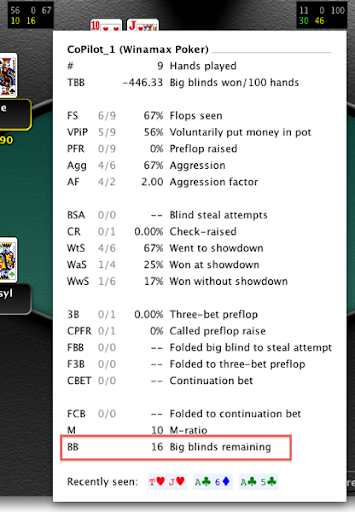 A Note to the Translators

Thanks for the stellar effort so far. I’ve extracted a bunch of strings I missed the first time round and added them to the individual Google Docs spreadsheets that contain the translated strings.

I’ve also updated the special build for translators here with the current translations.

An Update to the Updated Colour Chooser

There were some strong reactions to my post yesterday about a new colour chooser in Poker Copilot. So I’ve listened, and added access to the full colour picker if you need it:

That white downward-pointing arrow on the right-hand side opens the full colour picker.

BTW: if you can come up with a better set of colours that contrast well with each other and as text appear highly readable against the HUD background (black with 120/255 or 47% alpha transparency channel), please let me know.