A Poker Copilot Update for PokerStars users in France

If you play poker online and live in France, you are probably aware of a new law for online poker that start today, June 29th 2010.

Here’s what you’ll need to do to make things work:

These instructions are also here.

I’ll see if I can get support for the new Winamax client up soon. Stay tuned.

The forum uses new – and hopefully better – discussion forum software. The forum software and hosting is supplied by Vanilla Forums. I’ve been monitoring this for six months to make sure it is under active development. And it is.

The old forum was running on FogBugz. The discussion forums component of FogBugz doesn’t appear to have changed at all since I started using it for Poker Copilot, and it is lacking some useful features – like editing a post or uploading an attachment. I kept hoping things would improve but alas, they haven’t.

I outsource anything I can that doesn’t negatively impact the user experience. I don’t want to have to update operating systems, tune web-hosting software, or install discussion forum security patches. I don’t want to monitor yet another server to make sure it is always running smoothly. I’d much rather pay a reasonable monthly fee to have these problems taken care of for me.

If there is a newly-discovered security flaw in the forum software – or in the systems it is built on such as Apache, PHP, or MySQL – it won’t just affect me. It will affect all the companies being hosted by Vanilla Forums. When there are problems I can be reasonably confident that Vanilla will respond quickly. That’s what their business is about.

Oh and finally, I really dislike software like phpBB. I cringe when I find myself on a phpBB-based forum. It feels like I have stepped back a decade. However I do recognise that there are some highly successful web communities built on phpBB.

The next Poker Copilot update will show you HUD info in the hand replayer. It’s almost ready! 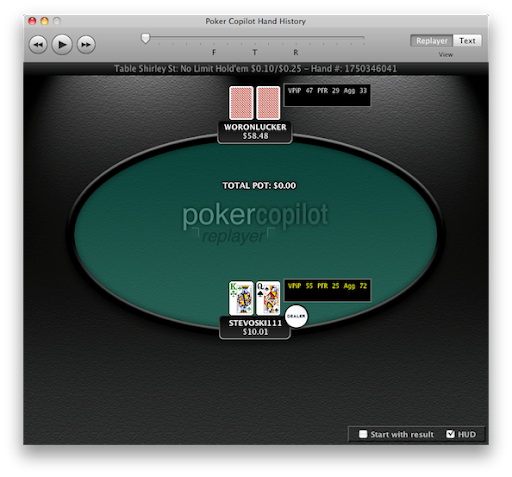 When I was a greenhorn programmer I felt like a programming superhero.

Every programming task seemed so easy.

Until I started the coding.

Need a form for entering customer addresses? No problems, I’ll have that done by lunchtime. Oh wait…it has to cope with addresses for people who live overseas with different address structures…? AND it has to cope with “care of” addresses…? AND some people in rural areas only have the town pub as their address with a note to ask the publican to “keep this under the bar until you next see Graeme”…? AND some people have multiple addresses because they spend six months of the year in Melbourne and six months in Brisbane…? AND we need to note if something we send to a customer comes back as “undeliverable”…?

Instead of hours that takes weeks.

I’ve learnt to spend far more time reflecting and designing than coding. I assume any programming task is pretty close to impossible but that with some assumptions and constraints I can produce something kind of useful to some people. When coding I feel most of the time like I am overlooking big potential problems. Sort of like that feeling you have when you can’t remember if you turned off the oven.

Which is why I love Patrick McKenzie’s Falsehoods Programmers Believe About Names article. It captures perfectly how difficult the most common – and seemingly simple – programming tasks can be.

Computer programmers need things to be orderly. But human society is unorderly, full of exceptions and oddities.

The next update of Poker Copilot will introduce keyboard controls for the hand replayer. The controls are based on iTunes, and are as follows:

Things have been a bit slow here at Poker Copilot headquarters recently. I am hoping, however, to pick up the pace and to get some good improvements done over the coming weeks. My aim:

What will happen [with Poker Copilot] when the new French online gambling ﻿laws are effective? The French laws will be like in the Italian model, playing between French players on certified rooms.﻿

Here’s what will happen: Immediate Poker Copilot changes and updates. As soon as it is clear what needs to be done to make Poker Copilot keep working in France, I’ll make the necessary changes and release an update. Poker Copilot already works with the Italian-specific version of PokerStars, so if they release a France﻿-specific client, we’re already in place to support it. We’re already adding support for Winamax’s new France-only client that will work within France’s online gambling laws.

I had a sneak look at Winamax’s coming ﻿new software today, and I was impressed. Winamax concentrates on the French online poker market. The good news, Winamax players, is that finally I’ll be able to add a working Poker Copilot HUD (Head-up Display) to Winamax when the new software is released.

From a technical point, I think the Winamax team chose a good cross-platform technology. They are using Adobe AIR, a technology that makes Adobe Flash and Adobe Flex applications run both as desktop apps AND as browser-based apps. Flash/Flex are inherently cross-platform.

What I like best about Winamax is that they are the only major online poker room that actually personally contacted me and encouraged me to add support for their poker room to Poker Copilot.