So the big news is that Full Tilt Poker has stopped operating worldwide.

Full Tilt Poker, one of the most popular online gambling sites, had its operations suspended by regulators in the British Channel Islands, delivering another blow to an industry already reeling from a U.S. crackdown.

Until recently Full Tilt was the second biggest online poker room. In my opinion they were the leader in online poker innovation. I also considered Full Tilt’s online poker software to be the best in the business.

Watch a video of Jon Skeet discussing how text, numbers, and dates are really difficult for software developers to handle correctly, yet they are at the core of most software.

Jon (with the help of a sock puppet?) shows that:

Jon Skeet and Tony the Pony from Carsonified on Vimeo.

Exactly three years ago tomorrow I released Poker Copilot 1.0. This is what it looked like: 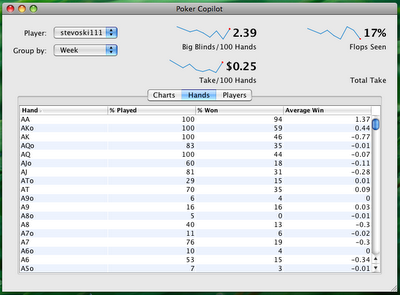 And now, the forthcoming version 2.91: 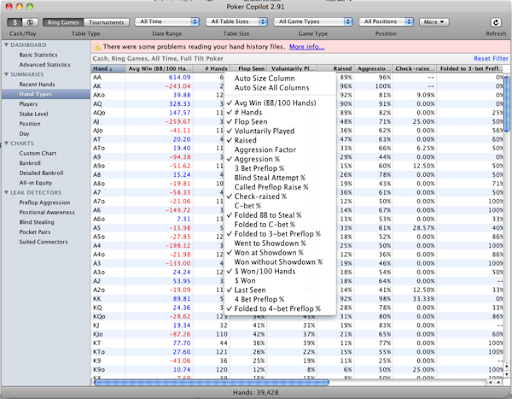 There’s been some improvement over the three years, I think.

Yes. Of course. Indeed. With a doubt. Indubitably. Incontrovertibly.

I could give you a reasoned explanation. Instead I’ll list some examples of good commercial software that exists and thrives despite excellent free alternatives.

Here are a few:

So how can commercial software exist and thrive where adequate free alternatives exist?

I’m not quite sure. But I’ll have some guesses:

JIRA says this at the top of their feature list: JIRA simplifies every step of tracking bugs for everyone involved.

I know which one is more likely to convince me it is software worth trying.

The financial imperative is a powerful one. When people are paying you for your software – and you require good word-of-mouth advertising – or you are trying to convert potential customers into paying customers – you have a strong motivation to support customers quickly and effectively.

Consider my free competitor, FPDB. Want to install it? Check out the instructions here. If you are brave enough and eager enough to take on that task, go for it. Otherwise, come back here and get Poker Copilot on your computer using our simple-as-can-be process.

Commercial software often does more, looks prettier, has better user guides, and is easier to use

The rule of “you get what you pay for” applies generally in software just as it does anywhere else in life. Yes, there are some notable counter-examples though.

Coming in the Next Update: Faster Startup

I’ve never had a complaint about the slow starting up, but it certainly affects me when testing new features and searching for bugs. So I guess I’m the main beneficiary…

A “How to Promote Your Product Online” questions

I’m the author of poker software called […]. I’ve read through your blog posts. I see you have a deal where you offer a free license to bloggers in exchange for a review. i really like that idea and am thinking of offering it myself. i was just curious how you handle the disclosure? Do you allow or want the bloggers to disclose to their readers that you offered them a free license in exchange? i would think that would taint the review, even if you obviously allow fully unbiased reviews.

A good question. My answer:

I tend to be very open to my customers about how I publicise my software. I’m quite happy for bloggers to disclose or not disclose, as they choose, that they got a free license. I’m also happy for them to write positive or negative reviews, short ones, or long ones, in a language I may not understand. With this promotion I’m seeking links in context, that help my Google ranking. I’d never do paid links to promote my software. That’s a big Search Engine Optimisation (SEO) no-no.

I _have_ learnt, however, to hold back the free license UNTIL the review is posted… Otherwise sometimes the review never materialises…

It’s been two months since the FBI and the USA’s Department of Justice closed down the most popular poker rooms to US-based players. Sales of Poker Copilot are now at roughly 40% of the pre-shutdown level. There has been little visible progress in the legal proceedings to date. Due to the large sums of money involved in the case, as well as possible prison sentences, I expect the legal issues to take a very long time to sort out. In the meantime, I’ve lost 60% of my income.

Therefore I have cancelled development of the next major version of Poker Copilot for Mac OS X, Poker Copilot 3. This was not a knee-jerk reaction. I’ve spent much time in the last two months contemplating how best to act.

But not all work on Poker Copilot is over. I’m going to take some of the planned – as well as some already-added – improvements from Poker Copilot 3 and add them to Poker Copilot 2. These will be free updates for all existing Poker Copilot 2 customers. All current and future Poker Copilot customers will continue to receive full support. I’ll keep fixing problems that arise as the online poker rooms update their software.