I didn’t want to release an update so soon but it is necessary due to three issues – one caused by me, one by an UltimateBet bug and one by Winamax releasing an updated and better hand history format.
What’s fixed:

What’s changed:
To sweeten the deal there are a couple of minor hand replayer improvements.

You can see these replayer tweaks in this screenshot of three-of-a-kind vs straight vs flush: 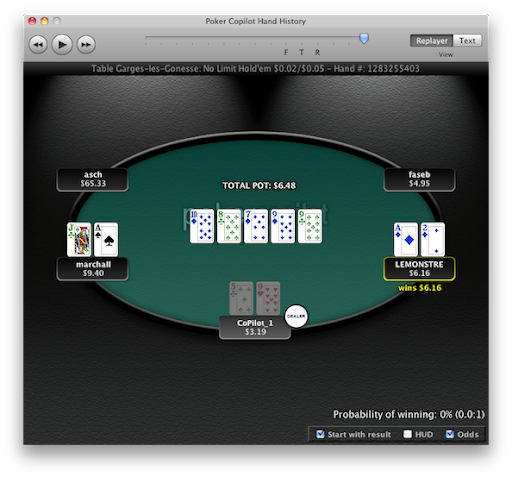 1. Download the latest version here.
2. Open the downloaded file.
3. Drag the Poker Copilot icon to the Applications icon. If prompted to replace an existing version, confirm that you do want to replace.

What I’ve Been Reading

* Alex’s Adventures in Numberland by Alex Bellos. Somehow it makes mathematics readable. It has the best explanation of equity value I’ve read.

* Kill Everyone: Advanced Strategies for No-limit Hold ’em Poker Tournaments and Sit-n-go’s by Lee Nelson and co. “Kill Everyone” is a disturbing title for book that lies on my coffee table. I found it particularly helpful in making my live tournament playing style more aggressive.

* Start Small, Stay Small: A Developer’s Guide to Launching a Startup by Rob Walling. A book I wish had been available when I started Poker Copilot. Perfect to read if you are hoping to start a one-person software company.

The next Poker Copilot update gives you a much more colourful head-up display (HUD). Here’s a video demo showing how you can customise the colours:

Tip: View this in Facebook in HD to see what’s going on.

Coming in the Next Update

The next Poker Copilot update has a new preference: “My Playing Day Starts at”. 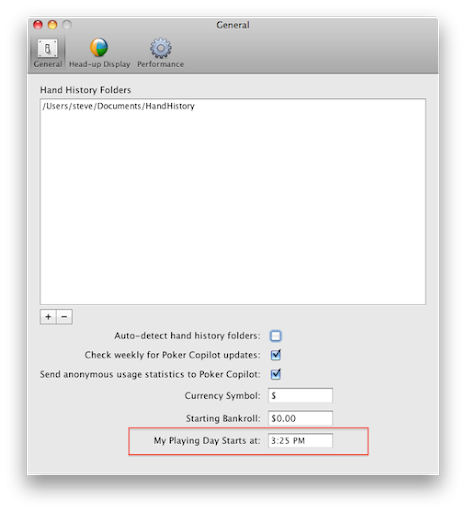 This is mostly useful with the new “Day” summary, which will also be in the next update. This is a feature to use with caution, as you may end up forgetting that you are telling Poker Copilot mess around with the concept of day versus 24 hour periods. Then you’ll find it mysterious that hands played this morning in real-world time were played yesterday in Poker Copilot time.

I corrected a spelling mistake in Poker Copilot’s code, and an unfortunate and entirely unexpected side-effect was this: if you had “fold to continuation bet” in your Poker Copilot HUD, then today’s early-adopters-only update crashed on you.

If you were affected by this, you can now try downloading the unofficial update again: http://pokercopilot.com/downloads/pokercopilot2.59.dmg

Many people are keen to try out  Poker Copilot’s new colourful head-up display (HUD). So here’s an update that is not an official update. It’s a chance for the early adopters amongst you to try out the new features first and give some feedback – and hopefully flush out any bugs in the colourful HUD that I haven’t yet been able to find.

This also contains a fix for the latest Winamax update.

The next update of Poker Copilot will have a “Day” summary. Much asked for, finally here. Here’s a screenshot: 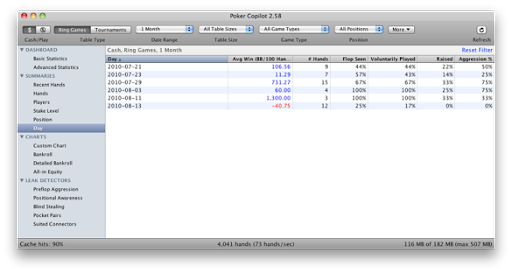 Naturally you can drill down on any given date to see the hands you played on that day. Like the similar screens, you can add extra columns and sort by any column.

You can also do a “Get Info” on any day to see full stats for that day: 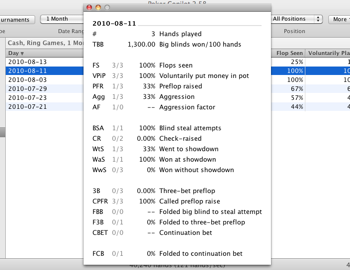 Loyal Poker Copilot customer Charles sent me an idea of how he would want the HUD colours configured. His settings seemed very reasonable, so this will be the defaults for the “Fireworks” theme: 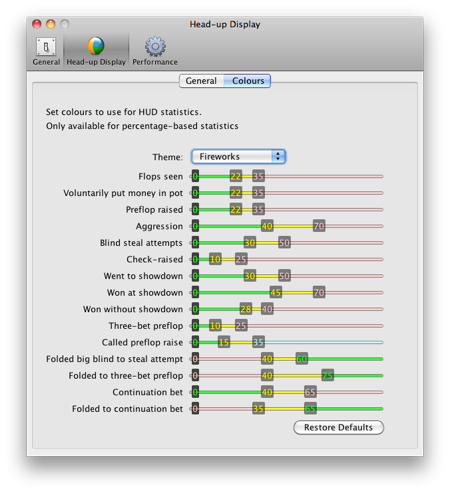 I played a session yesterday with these settings and it worked very nicely.

In this screenshot every statistic has three colours. Note, however, that this is not a hard limit – you can have as many coloured marks on each statistic as you choose.

Here’s what’s coming in the next update of Poker Copilot: 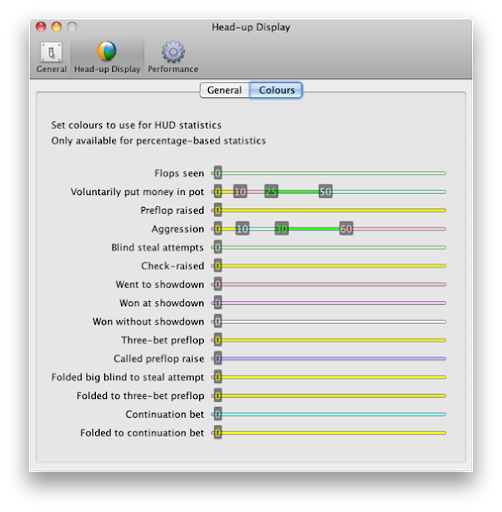 It’s still a work in progress. I’m leaning towards having three pre-defined colour schemes: “Pure Gold” – where all stats are yellow; “Christmas Tree” – where each statistic is in a different colour; and “Fireworks” – where all stats change colour depending on their values. Additionally there will be a “Custom” scheme which you can modify as you wish.

Here’s a small idea of how the HUD will look with colours: