A Breakthrough in Poker Copilot Performance

I’ve been struggling in my attempts to make the Player Summary in Poker Copilot go fast. So today, I set about rethinking the problem, and I think I’ve hit on a solution.

I asked myself, what are you most likely using the Player Summary for. My best guess: to look up info on players you are currently facing. So then, why show players you haven’t encountered for six months?

So here’s what I’m proposing for a coming Poker Copilot update: By default, the Player Summary will only show players you’ve encountered in the last 30 days. Here’s a shot of how it may be controlled:

By default that checkbox will be checked.

If you faced philivey a few days ago, then he will show in this screen, and all his hands matching the current filter will be shown, even the data older than the last 30 days.

I think this is a nice compromise: a speed-up for the most common case, but a quick override when you really want to see more data.

I have a suggestion for full tilt’s new rush tables. Could you make a modified HUD? Basically about the dimensions of the mucked cards window. It would show the players you’ve encountered in the last hour. And at least 4 stats in a horizontal list.

Even though you’re moved to different tables I’m seeing a lot of the same players. And there are starting to be regulars, so I’m sure I have stats on these guys. It would be great if this Hud only showed their Rush Stats. And there are only a few rush tables so that wouldn’t be that bad, right? 🙂

What do you think?

Why No Absolute Poker Tournament Support in Poker Copilot?

Tournament hand histories produced by Absolute Poker for Mac OS X are missing a line that tells us what the flop was. This makes it hard to determine automatically where the preflop betting stops and the flop betting starts. It also means that in hands where everybody folds to someone who bets on the flop, there is no indication at all of what the flop was.

UltimateBet for Mac OS X also has this problem with tournament hand histories, which makes me suspect the problem lies in the Cereus Network’s Mac software. I reported this problem to UltimateBet a couple of months ago.

In ring game hands, the *** FLOP *** line is always present. In Tournament hands, it seems to be always missing.

Here’s an example hand history from a Absolute Poker tournament I played in (and donked out of) today:

Between these two lines:

should be the flop, as follows:

If you would like to see tournament support in Poker Copilot for Absolute Poker and UltimateBet please report this issue to either or both poker rooms.

Yesterday’s experimental Poker Copilot update had a problem: it crashed if you had the “Mucked Cards” window open. I’ve now rectified this.

This release needs to blow away your Poker Copilot database and load your hand history files again.

Less than two weeks into my experiment with search engine optimisation (SEO), here’s the progress:

* In the US version of Google, it ranks on the 9th page of results. It’s a start, but it is 8 pages too far down.

* Google Webmaster Tools gives me some helpful information. For example, here’s the most common keywords that Google identified on the site: 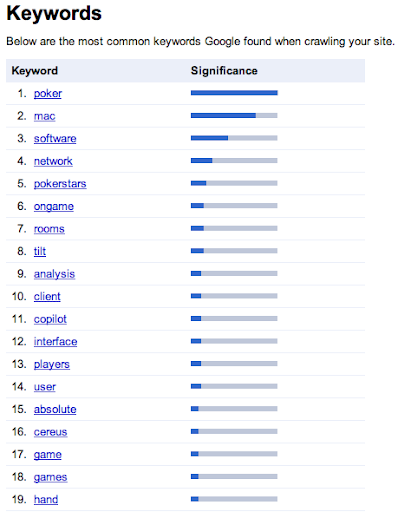 I’m using Google Analytics to track traffic. There’s a steady flow of visitors, mostly via this blog, but some are coming from search results:

Thought of the Day

…in a complex world one cannot simply identify a goal and plan your route towards it. Success must be groped towards gradually and with much correction of error.

Anyone running a small business learns this pretty quickly.

Not a Poker Copilot Update

Well it sorta, kinda is. But not an official update.

Some people are keen to get using the much faster Poker Copilot screen updates already, as well as the starred hands. So here’s a trade-off.

What you need to know:

If you are adventurous enough to give this a try, I’d love to hear of any problems you encounter.

From The Secrets of Looking Good on the Dance Floor in Spiegel, a German news magazine:

British psychologist Peter Lovatt, who has conducted rigorous field work in nightclubs, believes he can explain why some booty shaking is hot — and some is not.

The Next Poker Copilot Update will be Faster

How much faster? That depends on which Poker Copilot feature you are using. Here’s some time trials for importing 560,000 hands: 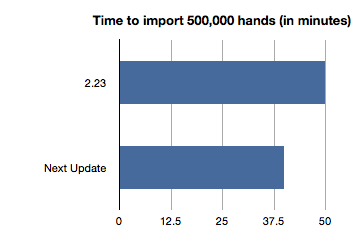 A 20% improvement. But as loyal Poker Copilot customer Keith X recently stated in a blog comment, “Import time is almost meaningless to me, once the DB is set up I never have to worry about it. So I’d suggest you always make the import time vs. HUD / stats refresh time tradeoff in favor of the actual playing elements.” I agree with Keith X. So let’s look at how long the stats take to update. The following chart is for 560,000 hands, of which roughly 460,000 are ring game hands and 100,000 are tournament hands. All times are in seconds:

Every category except “Ring Game Players Summary” shows improvement. In some cases the improvement is remarkable: only 1/1000th of the time previously needed, so that it doesn’t get even a smidgin of a bar in the chart. In other cases, the improvement is more modest.

Here’s the data in tabular form: 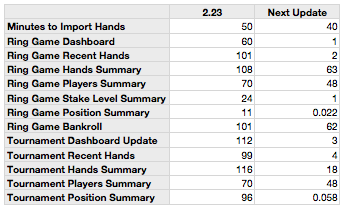 I hope to make every screen much faster than before. I’m still struggling a bit with Hands Summaries and Players Summaries and I want to get it right before I do the next update.

Andy Brice wrote an excellent post on outsourcing software testing. One line dear to my heart:

It isn’t sufficient to do all your own testing on software you wrote, no matter how hard you try.

Andy, like me, runs a one-person software company. He used two software testing companies, one in India and one in Ukraine, both of which charge $15/hour.

I’m tempted to use one of the companies Andy tried. The problem I foresee, however, is that testing Poker Copilot requires a lot of knowledge about poker and the definition of the statistics. Even trickier is that testing the Head-up Display requires playing online poker.

I’ll have to give this one some more thought.