Coming in the next update: FALSE filters

The next update changes this. The Advanced filter lets you select “is true”, and “is false”: 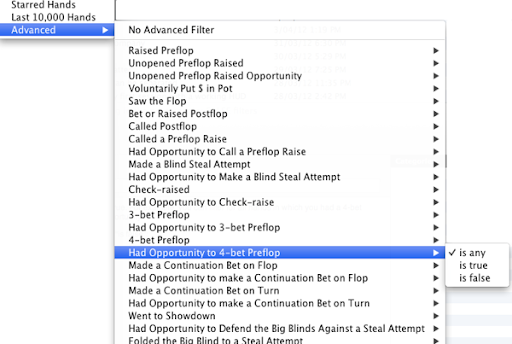 The filter bar indicates “is true” and “is false” with a plus or minus sign in front for the relevant statistic:

I added this out of my own frustration. Sometimes I’m trying to pinpoint a problem and I determine that the problem DOESN’T lie in a particular “statistic is true” setting. To inverse the filter I’ve had to go manually to the database. Not any more.

Yesterday evening I spent some time brainstorming a more graphic layout for Poker Copilot’s dashboard. Here’s a draft of how I can, for example, show VPIP.

It is aimed at first-time users of Poker Copilot who want to get an understanding not just of their statistics, but what the statistics mean in terms of playing style.

At the moment this is just an idea that’s on the list of potential improvements.

In Merge Network tournaments, sometimes the amount of the big blind is not specified. This happens if a player goes all-in in the process of paying the blind. As of the next update, Poker Copilot uses some smarts to guess the big blind in these situations.

Here’s an excerpt of a merge network hand with this issue:

In these situations Poker Copilot now tries to determine the big blind by doubling the small blind. If the small blind is missing as well, then Poker Copilot looks at the previous hand parsed from the same hand history file and uses the blind info from that hand. This can occasionally still be wrong, as the blinds might have increased since the previous hand. Or this might be the first hand in a hand history file.

Poker Copilot has dozens of such heuristics, coping with different oddities in different poker rooms.

I spent the easter weekend improving Poker Copilot’s app-updating. I wrote of this first here. As I developed the approach, technical issues steered me towards a two-part solution.

Part 1 is a notification within Poker Copilot of the update. This gives you a 1-click “get out of my way” or “update now” option: 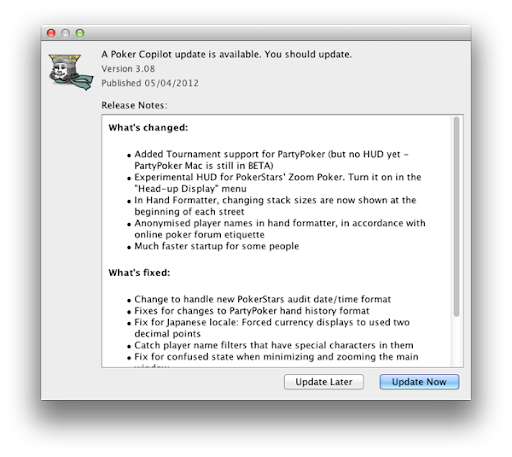 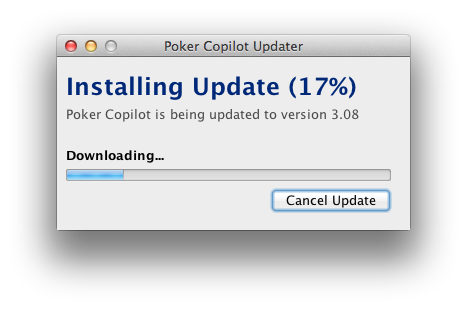 At the end, the Updater closes itself, and relaunches Poker Copilot. This should help you keep Poker Copilot up-to-date on your computer. It will also reduce some of the support emails I get which say “I thought I updated but I still have the older version”. These occur due to the confusing update process up till now.

The new updater will be in the next Poker Copilot update. However, you’ll only see it in action on the subsequent update.

Carbon Poker has its own HUD! (but only on Windows)

Wow. Yesterday, Carbon Poker announced their own HUD built into their poker client. That will certainly level the playing field somewhat. And give Carbon players an edge over other players on the Merge Network.

I spent some time today working on a better workflow for updating Poker Copilot from your computer. Currently it is a manual process and confusing for some people. 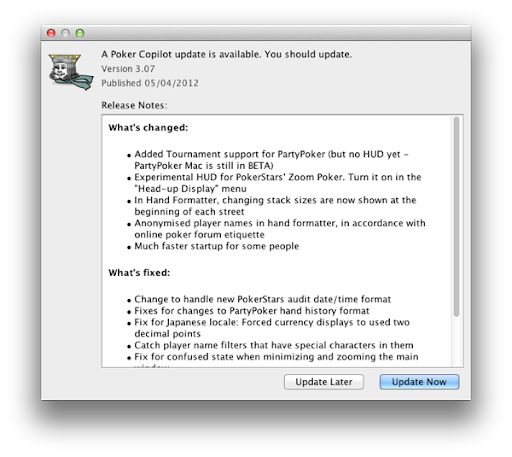 Click on “Update Now” and a progress bar appears at the bottom of the window and downloading starts: 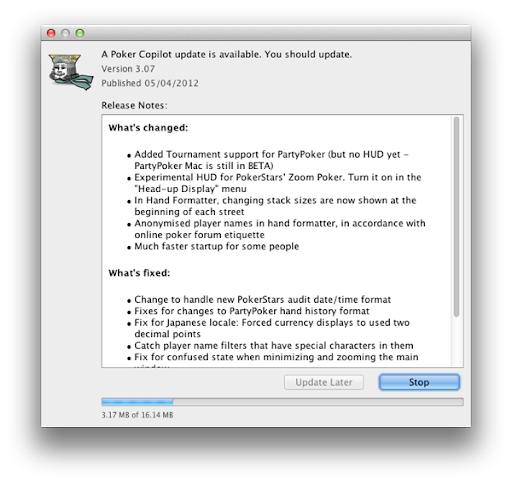 Many Mac apps use a nice auto-update mechanism called “Sparkle“. For technical reasons Sparkle isn’t suitable for Poker Copilot. I wish it was; it would make this much easier.

I’m not sure yet if I’m be able to be make the whole process of downloading and updating happen with a single click; especially with the ongoing changes Apple is regarding applications and security. For example, the next update of OS X, called Mountain Lion, introduces something called Gatekeeper, which will limit which apps can be installed and possibly what they can do.

I stumbled upon an alternative approach to handling Mac OS X updates by Lennart Ziburksi. Check his blog post a lucid explanation of a well-thought-out process.

I think it is novel and worth considering too. It is less intrusive, not demanding your attention on startup. I wonder if it is too discreet, causing people to ignore the update. This would be bad for Poker Copilot customers, because you really need to keep using recent updates due to the ever-changing poker rooms. My support workload would then rise.

I like the fully automated approach. If I could have Poker Copilot in the App Store (which I can’t), then I would get this update mechanism for free.

A strange Poker Copilot bug report arrived yesterday: for one user the cents part of bets, table stakes, and statistics were not being shown. A $0.05/$0.10 table was shown as $0/$0.

Fortunately the person who reported the bug discovered the source: if your Mac was set to run in Japanese, then this happened. The reason is that the Japanese Yen doesn’t get divided into hundredths, cents, centavos, kopecks, pennies, or fens. Therefore when you get the system currency formatter it doesn’t want to show that part of the currency.

I had mistakenly assumed that all currencies are split into hundredths. This may seem an obscure localisation problem to some, but must be faced by many companies large and small.

The next update will “fix” this: I’m now forcing the currency formatter to use two decimal places. Ideally though, I need a library that will allow me to format currency X as per the custom in locale Y.

Wikipedia has a comprehensive list of currencies and here are some “exceptions” to my 2-decimal-place assumption:

0.7 decimal places: Malagasy ariary, Mauritanian ouguiya. Yes, 0.7. These two countries divide their unit of currency into five subunits, so Wikipedia wonks decided to get all mathematical and describe this as 10 ^ 0.7 which is approximately 5.

Thank goodness I don’t have to handle the UK’s pre-decimal pounds/shillings/pence.