Steven Hamblin, the man behind BlazingStars, tells me that upcoming plans include support for Full Tilt Poker.

The video turned out a little bit squashed. However I’m too busy programming to fix it.

Adding the validation for all the input fields took far too long. But that’s programming: the basic functionality comes quickly, but making it reliable, usable, and presentable eats up far more time.

I’ve now used up half the weekend. Let’s see what I can get done before the weekend is over.

I spent an hour this morning with Balsamiq Mockups toying with various UI for Mac OS X poker odds calculator.

I then spent an hour getting used to Xcode and Interface Builder again. Thank you Aaron Hillegass.

Another hour disappeared into working out why using Cocoa’s NSTask to run a command line process made all subsequent logging statements disappear. (The solution is here, by the way).

Finally after getting that stuff out of the way, I made some progress. Here’s a screenshot of PokerZebra, a working, simple poker odds calculator for Mac OS X:

It’s not PokerStove yet, as it currently doesn’t work with ranges of hands, nor does it colour-code the equity values. But it is a good proof of concept.

Why the name PokerZebra? It’s a working title. My secondary computer was in screen saver mode, showing photos I made while travelling. I told myself, the next photo will inspire the name. And this photo appeared: 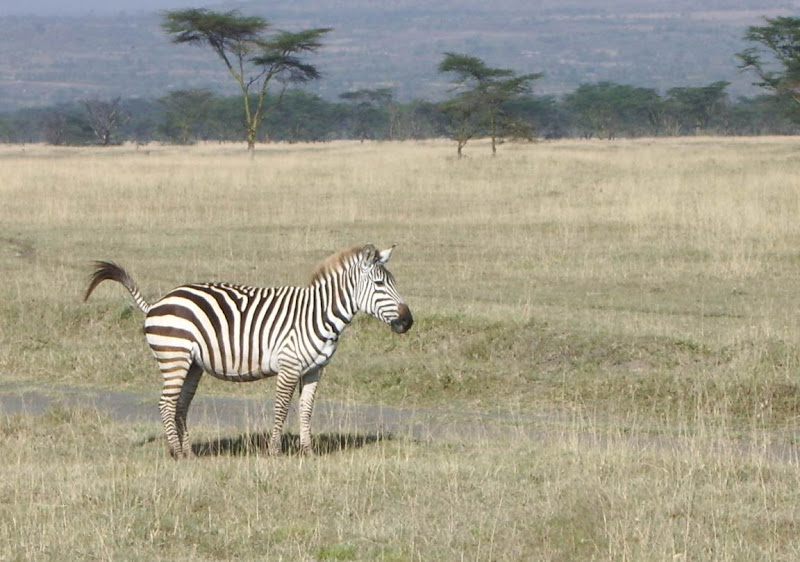 PokerStove for Mac: Coming this Weekend?

I’m home early from a Friday night live poker tournament. The villain went all-in on the river. I followed. My pocket kings (KK) were beaten by his A6.

Now I’m home and I’d like to put KK vs A6 into PokerStove, so I can find out the percentages at each street in the hand. Except there’s a problem: PokerStove runs only on Windows.

So this weekend I’m going to rectify the situation. My aim is, by Monday, to create something like PokerStove for Mac OS X.

The calculations will be done by a command-line utility back-end. There will be a lightweight GUI front-end for input and output.

At the moment I’m trying to integrate poker-eval into Poker Copilot for the upcoming All-in Equity Value chart. poker-eval is quite similar to PokerStove but runs from the command line. It’s an open source library for evaluating poker hands. It’s written in C. Hard-core C. I can’t follow the code. But I managed to compile it – although the compiled version only runs on the computer I compiled it on.

On Sunday I’m meeting a friend who is proficient in C, Xcode, and poker-eval. He’s going to help me get poker-eval building within Xcode. We’ll get it compiling and building a distributable command-line tool.

This will resemble PokerStove. It will be created in Interface Builder using Cocoa and Objective-C.

Will I succeed? Do I have enough time? I hope so. The hardest part has already been done in the poker-eval library. I have no plans for Saturday except going for a swim.

Will this be free? open-source? added to Poker Copilot? I don’t know. I don’t know. I don’t know. The poker-eval library is licensed under the GNU General Purpose License V3 (GNU GPL). My understanding of the GNU GPL is this: if I modify the source, I have to distribute the modifications for free. But the architecture I’m using means poker-eval will not be linked (in compiler terms) to the front end. So I can keep the front end closed-source and/or commercial. That doesn’t mean I have to keep it closed source.

What will I call this thing? Poker Odds Calculator for Mac OS X is not catchy but it leaves no mystery as to what the app does. Poker Copilot Copilot is just silly. PokerOven? BadBeat? iOdds?

I’m surprised this didn’t catch my attention early. Hold’em Manager abandoned the cluttered tab-within-tabs nightmare that plagues poker tracking software. Instead they now have something similar to Poker Copilot’s “Source List”, or side-menu. Of course Poker Copilot borrowed the idea from Finder and iTunes. 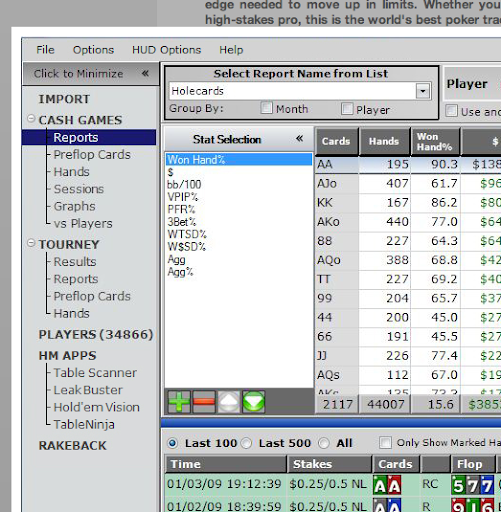 Here’s a screenshot of the work in progress: 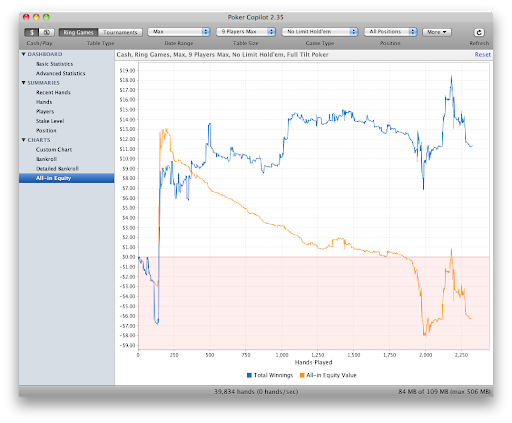 As you can see progress is good. Except the All-in Equity Value line on the chart is completely wrong. I mean, not even close to reality. I’ve create a dummy function to create the equity value. Which brings me to my point: everything is done and working except the hardest bit: the function/method called calculateEquityValue() which takes as input a hand and turns as output the equity value in cents…

Can any of my readers guide me to a good formula/function/algorithm for calculating all-in equity value? What are some of the issues you would like me to consider when calculating equity value?

Thanks for updating Poker Copilot to work with UltimateBet. Will it also now record and analyse tournament hand history (like it does for Poker Stars)?

The Germans have this great word, Jein. It is a combination of Ja (yes) and Nein (no). And Jeff, that’s my answer: Jein, yes and no.

Additionally, the HUD now works with tournaments in both Absolute Poker and UltimateBet.

I was also hoping to add support for “preferred seating” in these two poker rooms. But I’m reluctant to make so many changes so quickly. So I’ve shelved this idea for now.

Rational to Use Poor Passwords?

So claims a Microsoft research paper:

It’s hard to blame users for not being interested in SSL and certiﬁcates when (as far as we can determine) 100% of all certiﬁcate errors seen by users are false positives.

The premise of the paper is that using strong passwords, checking that URLs are not phoney, and reading SSL certificate warnings cost the average user far more in time than what they are, on average, likely to lose. Furthermore, most password attacks are through phishing and key logging, in which strong passwords provide no protection.

Ultimate Bet and Absolute Poker are not showing the HUD currently in Poker Copilot. That’s because according to Poker Copilot they seem to be incorrectly logging the time of the hands.

A possibility is that daylight saving seems to have started, but UltimateBet/Absolute Poker are still using winter time.

This confuses Poker Copilot, because it looks for a hand played in the last ten minutes to make sure the info is timely.