Hand replayer, Retina displays, and stumbling upon a longtime bug

Poker Copilot’s hand replayer has a sleek new design in the forthcoming Poker Copilot 4. It takes full advantage of Retina displays to look crisp and detailed. 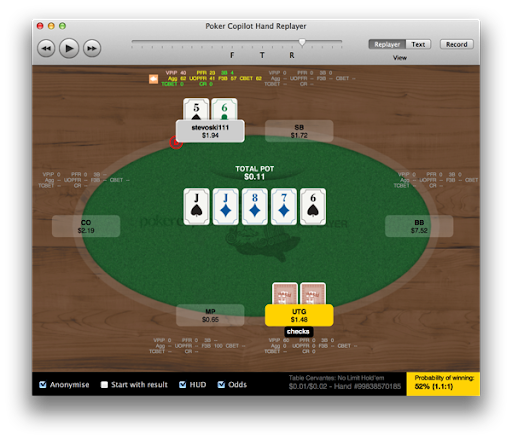 I made the mistake, however, of not regularly checking on a non-Retina display, so until today’s update of PCP Dallas EAP, the hand replayer looked a bit blurry on non-Retina displays. This problem is now mostly solved.

Today I’ve been running the hand replayer on two computers at once: a MacBook Pro with a Retina display, and a non-Retina iMac. When running the same hand, I was puzzled to see that the “Probability of winning” differed slightly for the same hand on the two different computers. This bug must have existed for years, and was never discovered and reported. The solution was simple: to ensure that the “Monte Carlo” simulation that calculates the probability of winning always uses the same starting parameters. The deck of cards used for the simulation was being prepared in a partly (although not really) random order.

I get an immense sense of satisfaction discovering and solving such problems.