I’ve been playing heads-up sit and go tournaments (HU SNG) over the last couple of weeks. It’s nice to note that Poker Copilot works very well with HU SNG’s, because there is so much screen space to use. I can see a dozen stats, with labels:

HU SNG’s are a game where you raise a lot pre-flop. Depending on the opponent, when I have position I might  raise 50% of the time, 75% of the time, or even more. In fact when I played a HU SNG today, I noticed my opponent folded to 80% of my pre flop raises, so I raised pre-flop 89% of the time from position.

The information I need to help decide when to raise pre-flop is to know whether I have, for example, a top 50% hand, or with a nitty opponent, a top 75% hand. Looking this up manually in PokerZebra does the job but it is slow and clumsy to do this mid-hand. 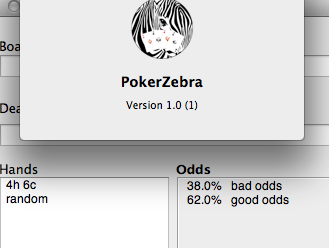 That’s why I want a tool that shows in real-time my percentage chance of winning. I’m surprised that no-one has yet created and made available such a tool for Mac OS X, as it is not overly difficult to do for a programmer of some talent. So I’m going to try to create such a tool over the next week or so.

There is a problem though. Full Tilt Poker always banned software that showed real-time odds. As far as I can tell, PokerStars allows it, but it is not clear to me whether this really is the case, and whether it will continue to be the case. Other poker rooms lack any clear policy. If Poker Copilot gets banned by online poker rooms, I’m out of business. So I’m going to create this as a separate tool.

Over the next few days, I’ll describe the steps I take to in an attempt to build this tool, which I’m called SeeingStars.