This is question you MUST be asking as a Poker Copilot user: can I trust the HUD data for a specific player? The answer is, it depends on how many hands you have AND which statistic you are looking at.

Most statistics in Poker Copilot are calculated by dividing a numerator by a denominator. For example, Voluntarily Put $ in Pot (VPiP) is calculated as follows:

If you’ve played 20 to 25 hands or so, you can consider this to be statistically significant. This is why Poker Copilot’s HUD initially shows statistics for a new player in grey, only switching to full-colour after you’ve collected 25 hands against that player.

The calculation for Folded to Four-bet Preflop (F4B) is

For this to be as statistically significant  as VPiP after 25 hands, you need to play enough hands for the denominator to be >= 25. That is, 25 opportunities to fold to a preflop 4bet. How many hands is that? At full-ring microstakes No-Limit Hold’em, probably around 4500 hands.

As such I consider a stat such as F4B to be far more useful for analysing your own game, rather than making a decision about a villain. Before you made a decision based on an opponent’s F4B stat you should definitely click on their HUD panel to bring up the pop-up panel which has full information. In dark grey you’ll see the numbers behind the stat. Make sure that the denominator is at least 20 or so before using the stat to make a critical decision. 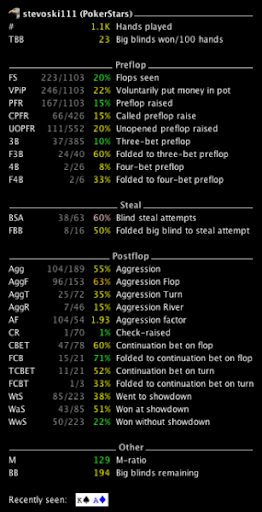 You can see in the screenshot above that after 1,100 hands, that all the denominators are large enough except for “Folded to four-bet preflop”, “Folded big blind to steal attempt”, and “Folded to continuation bet on turn”. Here is a good rule of thumb for full-ring No Limit Hold’em for the most important stats:

With less than this, be cautious, double-check the denominators, and use your own judgement about the player based on the stats that already are statistically significant.

In 6-max and heads-up, these statistics will become statistically significant quicker.