Coming in the next update: Filter by Player

The next update of Poker Copilot will have a new filter in the “More” drop-down menu: the ability to filter by hands where a specific player was at the table: 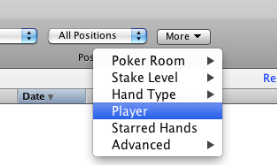 So, for example, I can filter for all hands where player XYZ was sitting in at the table. It doesn’t matter if XYZ folded pre-flop, took down the hand, or anything in between. As long as the player is at the table for the hand, the hand will be included in the filter.

This filter is for ring games only for now. If feasible I may add it for tournaments later.

If the player filter is used, screen updates will take much longer than usual. That’s because what Poker Copilot does to make this feature available is quite complex.