Poker Copilot 2009: The Year in Review

Summary: Things went exceedingly well. There were some hiccups. I learnt some lessons.

Let’s start with a chart: 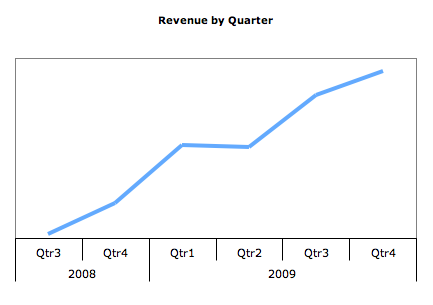 Each quarter has been significantly better than the previous except for 2009 quarter 2. I’m pretty sure that anomaly was because I announced I was working on Poker Copilot 2, leading many potential purchasers to wait. What a way to scare off potential buyers!

Poker Copilot earns me a good income for Germany, where I live. I work nice, flexible hours. I’m far more satisfied with my work compared to consulting.

I released version 2. I released it too soon out of eagerness and there were quality issues. While trying to solve those initial quality issues, both of the major Mac poker rooms made changes that broke Poker Copilot. Trying to deal with quality issues AND make fixes for the Full Tilt and PokerStars changes lead to a painful and somewhat embarrassing couple of months where I felt like I was doing nought but chasing my tail. Since then I’ve made a forceful push towards better quality, better testing, and better processes.

The software itself has come a long, long, long way from where it was a year ago. Major features added in 2009 include:

I mostly did this but sometimes I failed on either the first count or the second count.

…will be in a separate blog post soon! I’ve got lots of good stuff planned.